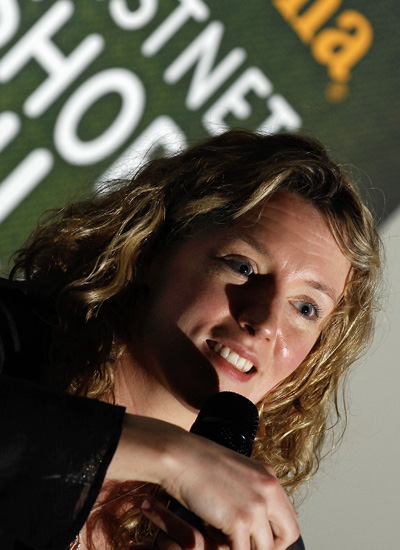 Kirsten Sheridan was born in Dublin, Ireland in 1976. She studied Film & Television Production at University College Dublin before completing a Diploma in Film Production at Dun Laoghaire College of Art & Design, Ireland’s national film school, graduating with Distinction in 1998.

Disco Pigs was selected as one of the three finalist in Europe for the Sundance/NHK International Filmakers Award which premiered at the Berlin Film Festival 2001 to critical acclaim.   It won the Jury Prize at the Castelinaria Youth Film Festival.  The Gold Medal at Giffoni Film festival.   The Audience Award at the Youth European Cinema Film Festival.  And the Grand Prize Best Film at the Ourense Film Festival.

In America was nominated for an Academy Award for Original Screenplay.  It also was nominated for the Golden Globe, The Online Film critics Society Award, the Writers Guild of America Award and the Humanities Prize. In the Best Screenplay category it won the National Board of Review, The Christopher Award, and the Broadcast Critics Awards 2004

August Rush received an Oscar nomination for Best Original Song. August Rush premiered in New York’s Ziegfield Theatre in November 2007 and was a box office hit, staying in the top ten for four weeks straight and playing right through the holiday season accumulating more than $30 million at the US box office

Kirsten lives and works in Dublin, where she has her own film production company ‘Blindside Films’ and is the mother of two small children.  As you can see Kirsten is a busy lady so you can imagine our delight when she took time out to participate in our 2009 festival. It was a wonderful experience for everyone who witnessed her interview with John Kelleher and her interaction with local kids at the Out Of Bounds Workshop.  We look forward to her continued support of our festival.