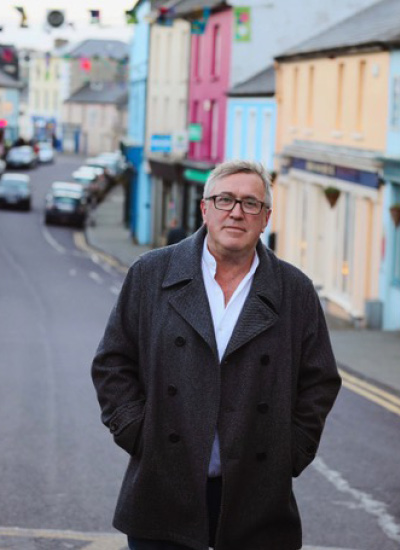 Gerard Stembridge was born in Limerick and educated at University College Dublin. He is an author and director and began his career as a producer in RTE. Within a few years he achieved countrywide success with his satirical radio comedy series ‘Scrap Saturday’, in association with actor and writing partner, the late, great Dermot Morgan.

He is the author of two novels, Counting Down and According to Luke and he has also written and directed for film and television. In the year 2000, he wrote the screenplay for Ordinary Decent Criminal (starring Kevin Spacey, Linda Fiorentino and Colin Farrell). In the same year, he co-wrote Nora, a film relating James Joyce’s infatuation with his chambermaid Nora Barnacle, starring Ewan McGregor and Susan Lynch. Gerard was nominated for an IFTA Award for this screenplay in 2000 and Susan Lynch won the Best Actress IFTA award for her portrayal of Nora Barnacle.  In 2003 Gerard wrote and directed About Adam (starring Stuart Townsend, Tommy Tiernan and Kate Hudson) which received three IFTA nominations for Best Feature Film, Best Director and Best Script.

He regularly appears as an arts reviewer and social and political commentor in the Irish Media, on John Kelly’s TV Arts Review The View and on Marian Finnucane’s weekend radio show, where he is a very popular contributor. He participated in our 2009 Festival by showing his first feature Guiltrip, and in 2010 the workshop he directed, Schull Je T’Aime, in conjunction with creative writing educator Donal Beecher and DOP Chris O’Dell, proved to be an extremely successful inclusion to our programme.